The History of LDN

Low Dose Naltrexone (LDN) is a breakthrough treatment that helps over 300,000 patients worldwide. This treatment uses a very low dose of the anti-opiate addiction drug naltrexone for a completely different purpose: treating chronic and autoimmune disease.

Low dose naltrexone was discovered at Penn State University’s Hershey Medical Center by Dr. Ian S. Zagon and his team in 1980. The clinical use of low dose naltrexone in patients was initiated by Dr. Bernard Bihari of New York City, who first used it for treating multiple sclerosis.

The first LDN clinical trial was initiated at Hershey Medical Center in 2002 by Moshe Rogosnitzky, who went on to found the MedInsight Research Institute that later launched LDNscience. The results of this pioneering study about using LDN to treat Crohn’s disease were published in 2007. The formalization of LDN-based clinical research prompted many other academic institutions to conduct similar research for a number of autoimmune and chronic conditions. By September 2016, over 60 publications existed concerning the clinical use of low dose naltrexone.

It is vital to note that all LDN research to date has been initiated and funded through patient-driven and academic-led efforts, without funding from any commercial sources. This has earned LDN the distinction of being the largest patient-led drug repurposing initiative in the history of medicine.

With rapidly growing physician and patient use of LDN, and a plethora of patient-created websites and anecdotes springing up on the web, it became vital to streamline scientific education concerning LDN and make information easily accessible to both patients and medical practitioners. MedInsight took in this initiative by launching a comprehensive internet-based resource, LDNscience, in 2009.

Since 2009, LDNscience has remained the most authoritative and up-to-date source of information about LDN, housing the entire collection of LDN research and scientific studies; interviews with scientists, physicians and patients; a free global LDN prescriber directory; frequently asked questions; and additional helpful resources for patients, physicians, and scientists.

As of September 2016, over 300,000 patients worldwide enjoy the benefits of LDN. MedInsight is proud to have played an integral role in initiating and leading scientific efforts into this safe and breakthrough treatment, which has provided relief to so many patients worldwide. 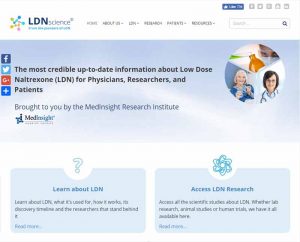 "A Life-Changer": LDN's improves Brooke's kidney disorder and much more

"My drug of choice": How 28 years of taking LDN has changed Bill's MS prognosis

A Future Back on Track: LDN Helps Kat Recover from RA (and improves her ADHD!)

LDN is a miracle, and a lifesaver: Tom's recovery from extreme eczema

LDN for Psoriasis and Psoriatic Arthritis - An Interview with Dr. Weinstock

The Power of LDN for RA: An Interview with Dr. Guttorm Raknes

Finding Hope for Fibromyalgia with LDN
«
Prev
1
/
3
Next
»